I fell in love with the internet when I discovered that everything was essentially under everyone’s control. Wikipedia, assignment go-to until it became a sleighted source. Over the past few years, I’ve racked up a thousand Wikipedia edits: not major article changes, no special permissions, no work on authoring new articles (aside from contributing to Tagalizing articles to Wikipediang Tagalog; which generally repurposes existing articles).

Wikipedia is one of the last bastions of the internet for socially acceptable pseudointellectualism. One of my favorite forms this takes place in is when grown adults address themselves in hyperspecific stamps called “Userboxes” on their Userpages (Wikipedia’s version of profile pages), usually to address their editing quirks. Think debates over usage of the Oxford comma, who can speak more languages, infinitive usage, nativity, and 2000s-esque criticism of to/too/two usage. My page is free of complaints for now; Userpages, like articles, are editable by any user. Instead, it’s customized with boxes that encapsulate my being at 20 and look my Myspace page at 12: typing fast, obscure British academiasphere, and Death Grips. It is one of my favorite places on the internet.

My work has normally taken shape in subtle formatting and spelling fixes across Wikipedia’s WikiProject Women in Music, in random Philippine-centric pages (including removing the righthand-man of an authoritarian dictator on my high school’s ‘Notable Alumni’ page with friends), and Talk page discourse (the war on categorizing Aphex Twin as Intelligent dance music––I’m twenty and not ancient, so my verdict is no). Initially, I was going to go over the history of my descent into Wikipedia until I found myself marching in some camisado. 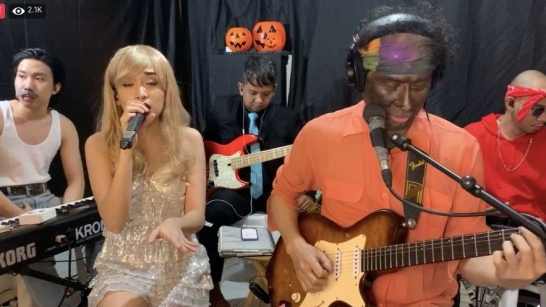 October 30th (about 12 hours behind, October 29th Eastern Time), a mostly-irrelevant Filipino band named MYMP streamed a Hallow’s Eve show on Facebook to over 50,000 viewers with the main vocalist, Chin Alcantara outfitted in blackface (he tried to dress up as Jimi Hendrix).

As is natural with any controversy, people were eager to know who MYMP was at all. 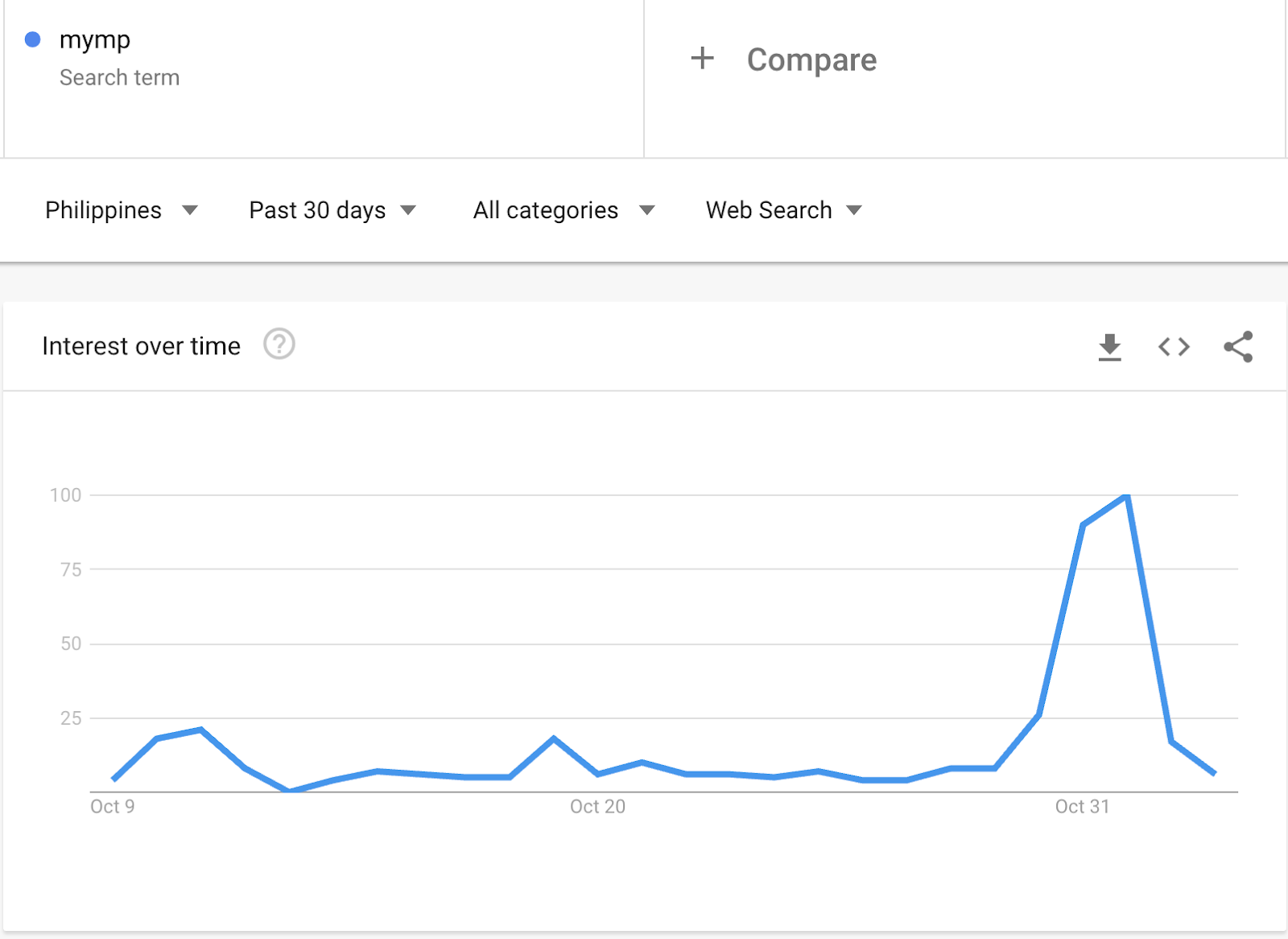 Naturally, such acts need to be placed on Wikipedia for posterity. And naturally, the offender’s PR team will come in to save face, usually spawning what is known as a Wikipedia edit war.

Edit wars occur when Wikipedia contributors in disagreement over page content repeatedly override one another’s contribution. On any page’s View history, reversion is as easy as hitting Undo. While most articles are openly editable, more contentious or vandalism-prone articles are usually given a level of Protection.

A three-revert rule, shorthanded as 3RR, (WP:3RR) is informally placed within editing etiquette: “an editor must not perform more than three reverts on the work of other editors, in whole or in part, whether involving the same or different material, on a single page within a 24-hour period.” Exemptions include self-reversions, vandalism, or cleaning up violations of clear policies. 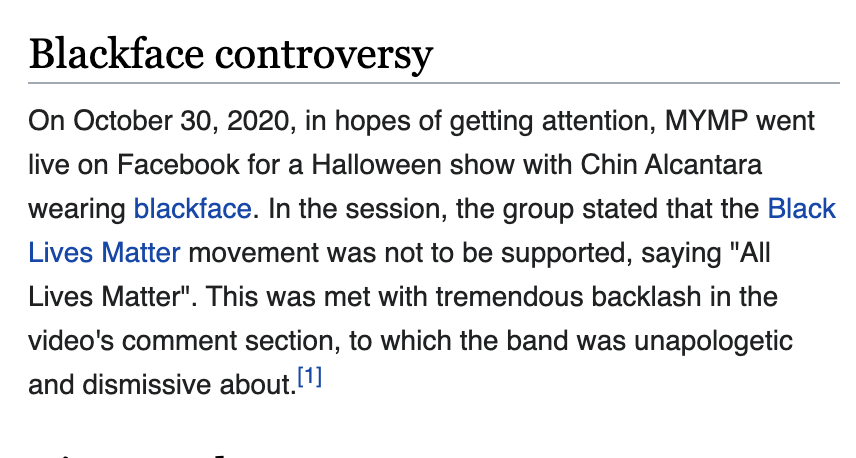 Because I am freshly twenty, I have not lost the virtue of pettiness. MYMP was consistently unapologetic and firm in not only their racist costume, but other dismissive and

Looking into other article conventions, I wrote a new “Blackface controversy” section beneath their hefty 1,800 word biography. Another editor, Davelo15 filled in the rest of the controversy’s details.A few other Wikipedians added to it, fixing up grammar errors. This was fresh, about thirty minutes after the Facebook live video had ended. Our only source and footnote (notably, also the only linked source on the article then) was technically invalid––we had to leave it as so until media outlets picked up on the controversy. 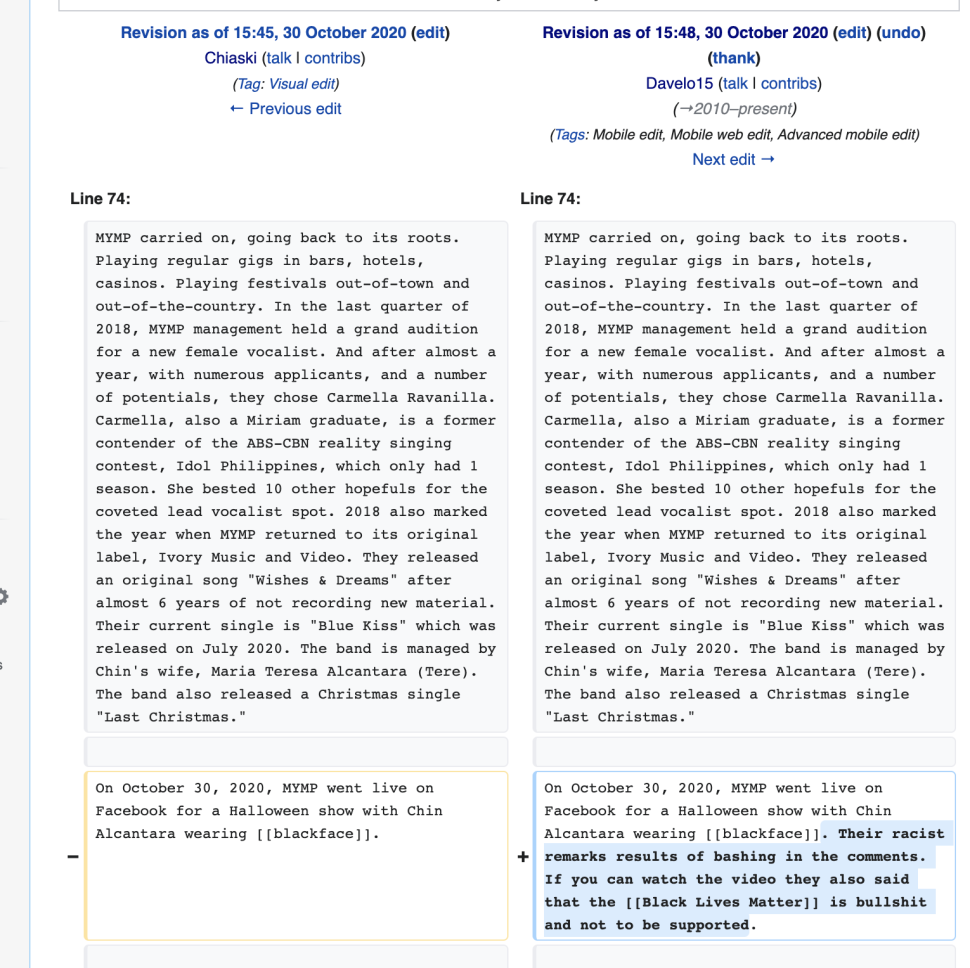 According to generic IP address lookups, 152.32.102.75 is located in Quezon City, Philippines––the same city that MYMP comes from. Wikipedia generally warns for unregistered users designed by IPs to make an account so that they can track edits easier in wariness of dynamic IPs shared by multiple users, but something interesting was that this IP was static; meaning that it was unlikely to changed and likely held by the same individual/household.

Clicking into their Userpage, we can see that this is far from their first dive into Wikipedia.

In November 26, 2019 on the Doppler Effect, they changed a random pronoun referring to Doppler to a friend’s name.

On the same day, Cosmic microwave background was given a little change to “Planet namic”.

Forward to July 3rd on National Telecommunications Commission (Philippines), an explicitly state-ordered shutdown in the pandemic changed to reflect expiry instead of continued government attack, and removed a completely valid reference from an official government website.

This went back and forth for a few times; random section blanking towards the controversy topic without any explanation. Wikipedia automatically applies a “section blanking” tag to edits that remove entire sections on this page; it became easier and easier to spot this IP as people roared.

Of course, other vandalism highlights popped up through the night, quickly reverted by me or other editors. I was not at all a neutral editor, but outright vandalism would ruin the work we put in –– the page would be at risk of complete rollback from a more powerful user. There were some politics in play.

Users with Rollback rights can revert edits back on a page, ignoring conflicts. Quicker than Undoing edits, rollbacks don’t require the user to look at the revision list/diff or save of edits––useful in quick and fast-moving pages. 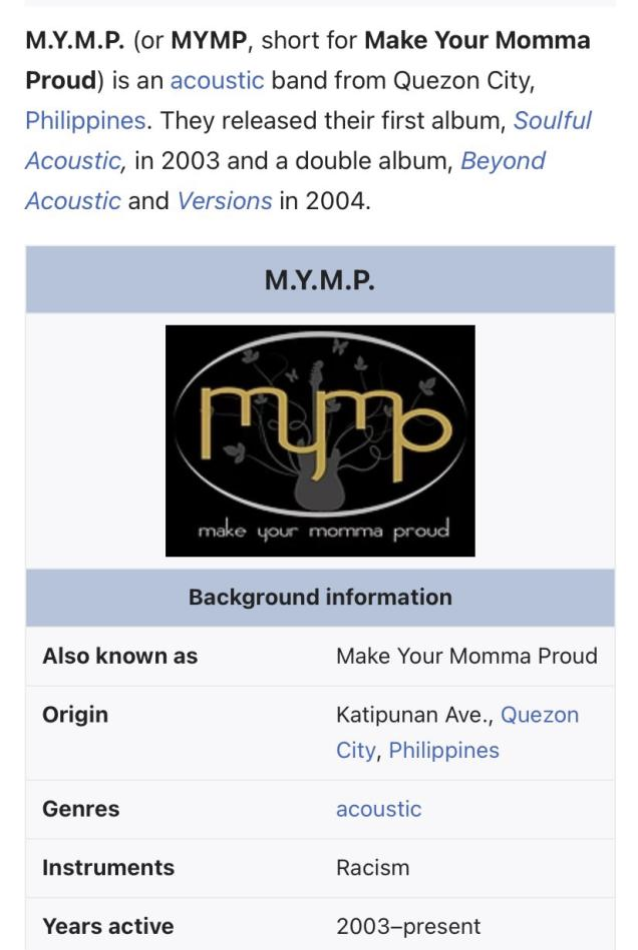 Instruments: Racism; added in by my friend that I berated after laughing, promise 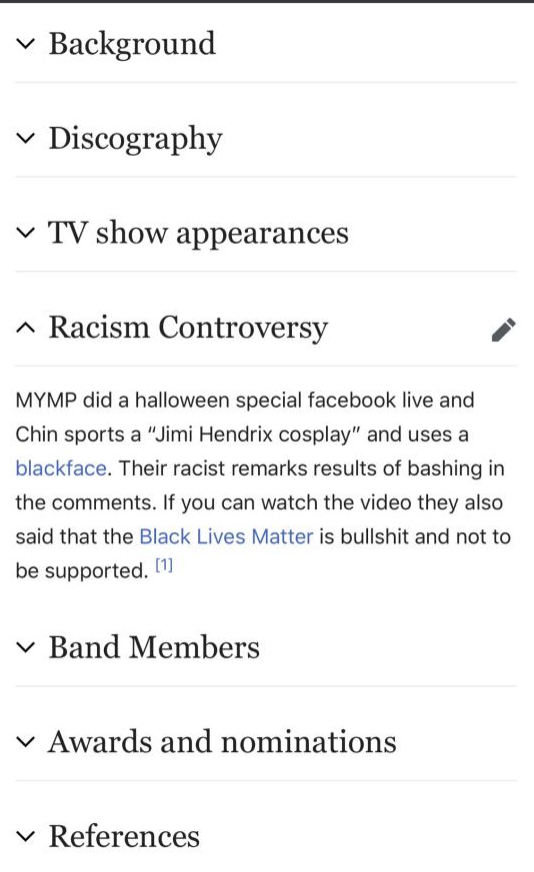 A rewritten version of the controversy, using less than ideal language.

The more I looked into the page after working to copy-paste our collaborative section back, the more I would be bothered by the undisturbed amount of “fluff” across the article. It was clear that the MYMP page also functioned as the artist’s self-biography (WP:FAMOUS), listing no sources and being littered with calls for citation, irrelevant junctures and asides, and negatively-written stories of past band members departing. I chunked out about 1,000 characters of fluff in my first go and slowly started whittling the page down even further: deleting irrelevant paragraphs, condensing sentences, and following the Wikipedian manner of due weight and neutrality (WP:DUE). When weight is measured by relevance and presentation in reliable sources and not by Wikipedia editors or the general public, it was easy to justify the fluff removal since the biography was largely sourceless.

Removing random notes about playing at an Indonesian Music Festival… 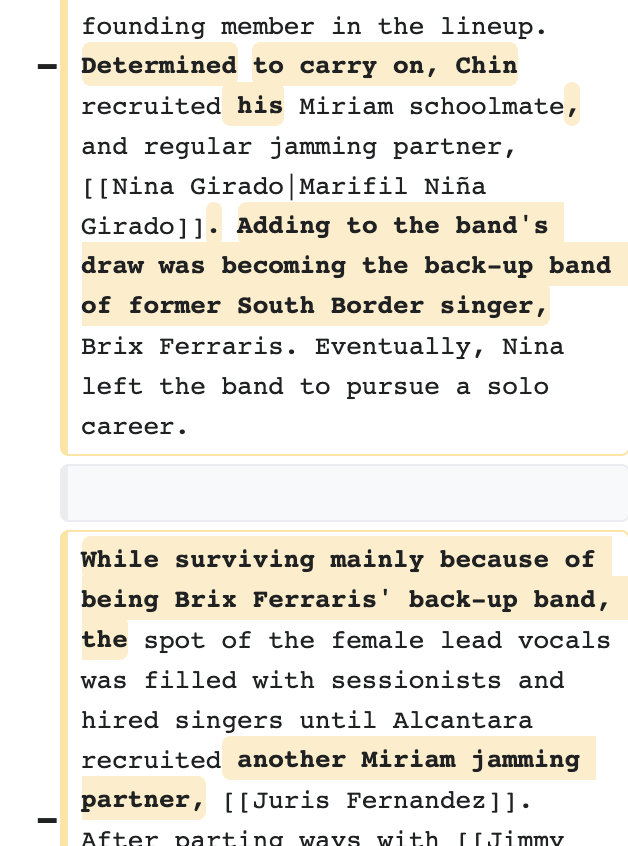 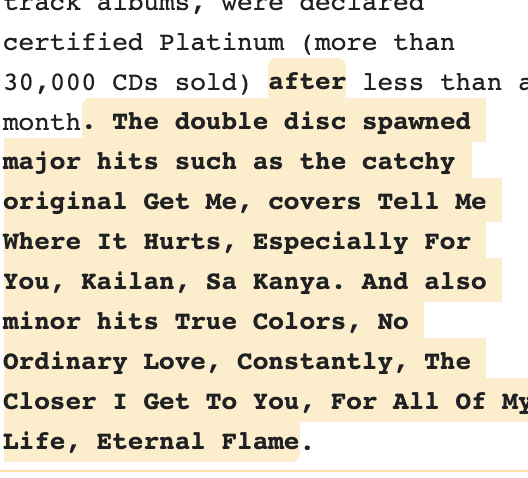 …and a strange list distinguishing between Major/Minor Hits, all cover songs––as I was confident that MYMP was not responsible for The Bangles’ Eternal Flame and that song was certainly not just a “Minor Hit”; this is what happens with cover bands, I guess…

Every time 152.32.102.75  would delete a section, I would quickly undo their edit. We had far surpassed the 3RR, except I sprinkled in each of this anonymous user/PR manager’s edits with a culling of their content until nothing remained. News articles started going up about the incident, quickly picking up on the social outrage and media buzz––helping us capture some worthy references. To ensure that content on retrieval is stored and saved as-is, we used the editorial practice of archiving news articles to ensure that they would be retrievable at any time, at the state of capture.

Timely, since a more seasoned Wikipedian stepped in earlier in the revision history to outline that Facebook isn’t a “good enough source”.

Each careful edit would be incised carelessly by the anonymous user with the same IP address. Sometimes, they would take material down in minutes. Towards the end, they began getting a bit sloppy––missing chunks of text to delete, leaving behind haphazard paragraphs and changing the name of the section to gibberish. 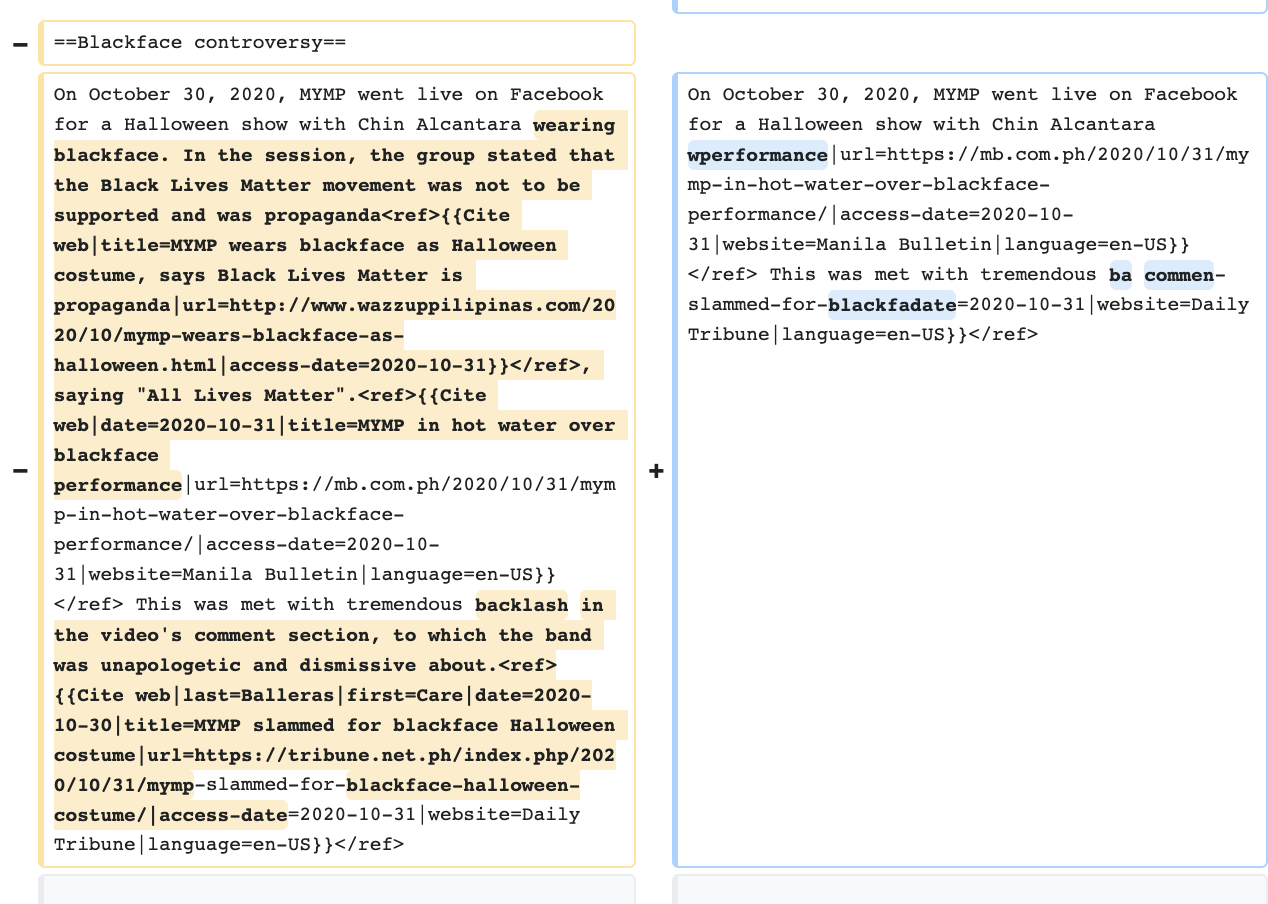 The unregistered account had nothing to add but “deleted a racial content that was added”, over and over and over.

Soon, their Talk page was filled with warnings directly citing edit wars and the dangers of shared IP addresses.

At the end of the night, a seven-year-old Wikipedia administrator ended the mini-war over a hundred edits and 25 repeated rollbacks.

User:Scottywong protected MYMP providing reason as “Persistent vandalism”, now only letting users with autoconfirmed or confirmed access unto the page. This was all hastily done with the template {{pp-vandalism}}.

Registered accounts are given autoconfirmation if they’re more than 4 days old and have made at least 10 valid changes.

Interestingly, a previous user without permissions attempted to apply protections to the page as well using {{pp-protected}} templates, to no avail. This was reverted by a bot (User:MusikBotII, operated by MusikAnimal running to fix pages, likely watching the Recent Changes section).

Wikipedia is built around/with the principle that anyone can edit it, and it therefore aims to have as many of its pages as possible open for public editing so that anyone can add material and correct errors. However, in some particular circumstances, because of a specifically identified likelihood of damage resulting if editing is left open, some individual pages may need to be subject to technical restrictions (often only temporary but sometimes indefinitely) on who is permitted to modify them. The placing of such restrictions on pages is called protection.

Protection can be applied to or removed from pages only by Wikipedia’s administrators, although any user may request protection. Protection can be indefinite or expire after a specified time period. WP:PP

This silent war made no use of the Talk page, and was a mildly unjust campaign undoing years of fluff that have been left on a musical page classified as a “low-importance biography”. MYMP’s racist actions are immortalized, at least for now, their PR agent/intern/superfan silenced, and their article rid of fluff, and risen to administrative notice from the minute-apart edit warring. I was definitely no neutral party either as I conversed with editor friends with untraceable connections over Discord, encouraging them to make their first edits (hence xxpunkgothxx and Instruments: racism) as they discovered how easy it was to contribute and shift the narrative (it was primarily us, the Filipino-American 6’11” Davelo15, and meddling moderators here and there).

I’m left to wonder––how many more pages are blatant autobiographies? In lesser-explored regions of Wikipedia like in English-Filipino articles, how much misinformation and faux-neutrality is left? How many people witness unfairness on Wikipedia but are intimidated by the rules that slip by? Why must it be the last edit that declares history?

(But I now know that everyone really looks to Wikipedia at the moment of catastrophe.)